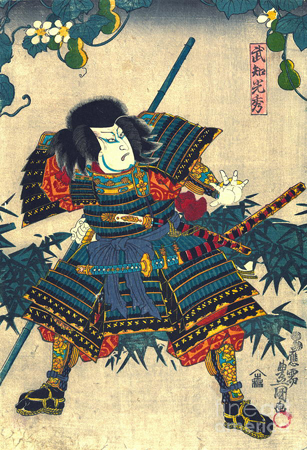 The Katana started is evolution as a sleeker and more compact alternative to the Tachi.

Previously, the curved tachi had been worn with the edge of the blade facing down and suspended from a belt.

Its growth in popularity is believed to be due the changing nature of close-combat warfare.


Its origins go at least as far back as the Kamakura Period, with several blades dated from that time residing in various national repositories.


The faster draw of the Katana was well suited to combat where victory depended heavily on fast response times. The Katana further facilitated this by being worn thrust through a sash (obi) with the bladed edge facing upwards.


The Samurai could draw the katana and strike down the enemy in a single motion.


The katana was generally paired with a similar smaller companion sword, like the wakizashi or a shōtō (essentially a short sword). It could also be worn with the tantō, an even smaller similarly shaped knife. The katana and wakizashi when paired with each other were called the daishō and they represented the social power and personal honor of the samurai.