The Traditional Umanori Hakama are the oldest and most traditional style of pants used in Japan during the 6th century and possibly earlier.  Traditionally hakama would tie at the waist and drape down to the ankle with two options, “andon” (skirt -行灯袴”lantern hakama“) or “umanori” (pant -馬乗り – “horse-riding hakama“) style.  The umanori style of hakama won out for the samurai as it was easier to wear while riding a horse, becoming known as “umanori” hakama.  It is important to note that these traditional hakama do not have the koshita (raised board), which became common in the early Edo Period (1603 A.D.).

The earliest hakama material was simple cloth woven from fibers of kuzu, or arrowroot plant.  Up until the late Muromachi Period (1336 to 1573), a variation of this rough but light cloth, called kakko, was popular for making hakama worn during the hot summer months.  By the mid Muromachi Period, cotton became more common and the preferred material for samurai and Daimyo alike.  Formal hakama are made of silk called sendai hira and are said to have become popular in the late Sengoku Era (around 1645 A.D.).  The hakama is traditionally worn with a kimono, hakamashita (hakama shirt) or juban-shitagi (undershirt).

Our Traditional Umanori Hakama are based on designs from original Muromachi Period.

They are secured around the waist by four himo (straps); two longer himo attached on either side of the front of the garment, and two shorter himo attached on either side of the rear. Front himo are wrapped around the back and tied in front.  The rear himo are wrapped through the front himo at the waist and tied under the hakama in the front.

Hakama have seven deep pleats, two on the back and five on the front. The pleats are said to represent the seven virtues of Bushido, considered essential to the samurai way. Although they appear balanced, the arrangement of the front pleats, (three to the right, two to the left) is asymmetrical, and as such is an example of asymmetry in Japanese aesthetics.  We also offer the option to add lace ties to the ankles so you can wear your hakama open or closed at the ankle.  You can also tie the bottoms below the knee when wearing with armor or kyahan.  Adding these ties will make a kukui (tied) hakama. 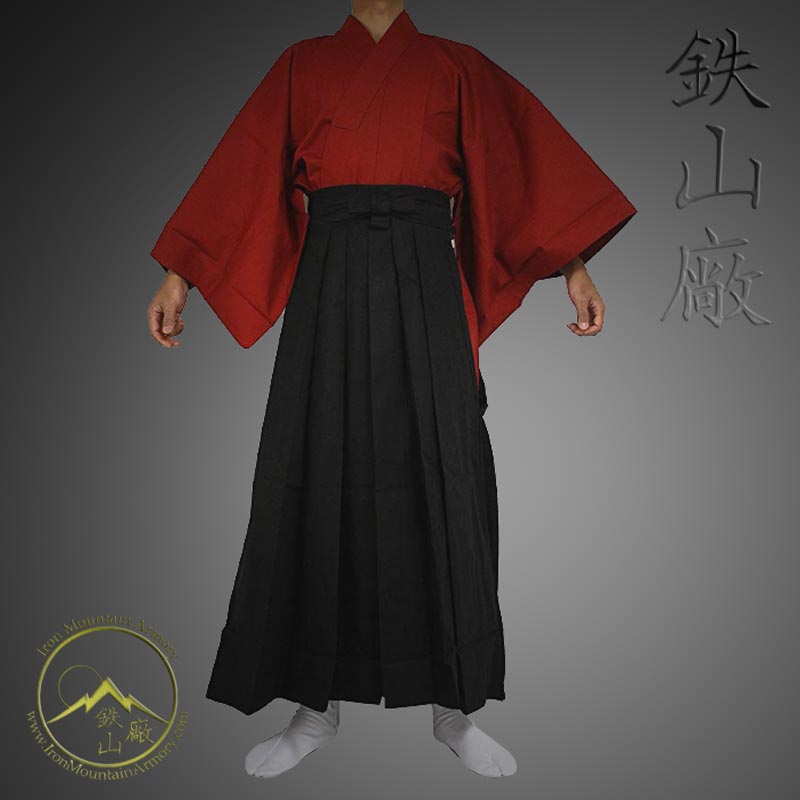