Yamamoto Kansuke was a Japanese samurai of the 16th century who was one of Takeda Shingen's most trusted Twenty-Four Generals. Also known by his formal name, Haruyuki. He was a brilliant strategist, and is particularly known for his plan which led to victory in the fourth battle of Kawanakajima against Uesugi Kenshin. However, Kansuke never lived to see his plan succeed; thinking it to have failed, he charged headlong into the enemy ranks, dying in battle.

Kansuke's origins are not known for certain, but he is believed to have originated from Ushikubo, a town in Mikawa Province, which was then under the suzerainty of the Imagawa clan. He came to Kai and began to serve Takeda Shingen in 1543, receiving a position as an infantry commander (ashigaru-taisho).

Legend says that Kansuke was blind in one eye and lame, but a fierce warrior nevertheless. In various works of art, he is depicted holding a naginata as a support for his weak leg. Kansuke was also involved in bringing the defeated Suwa Yorishige's daughter to Shingen as a concubine.

This fine authentic reproduction of traditional Japanese yokohagi Okegawa ni-mai dô samurai armour is hand made by the Iron Mountain Armory. Each suite of  Gahira & Taisho class samurai armour comes with the customary Gusto Bitsu (armor storage box) and a wooden stand for the display of the armour.

His steadfast devotion and fearlessness when charging into battle set him apart as a legend. This is one of our most popular samurai armor sets. You will know why when you have it displayed in your home or are wearing it for a reenactment!  Also available in Kachi and Taisho class. 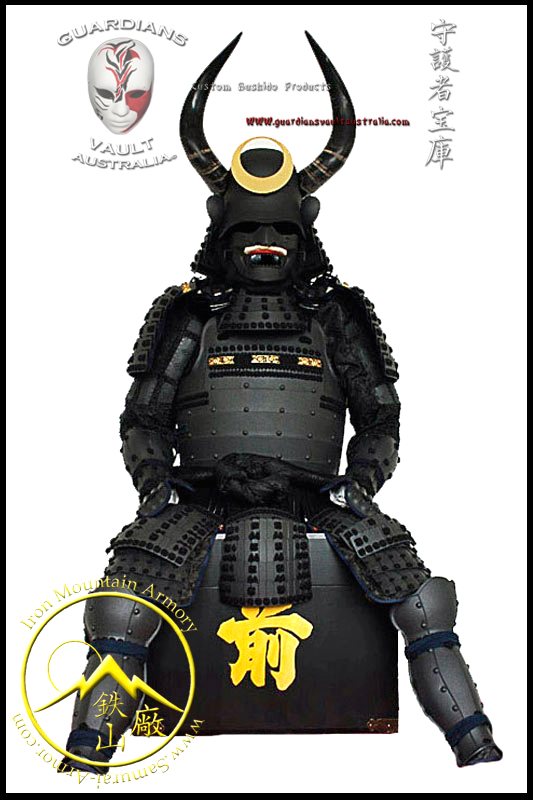