The Ashigaru Samurai Dō is a kachi class Dō (chest armor). It is a basic and economical designed currais, specifically crafted to be used by ashigaru (foot soldiers). Iron Mountain Armory’s standard  Ashigaru Dō is crafted in the Okegawa ni-mai Dō traditional style. The chest plate is made up of 12 individual iron lames (front + back) and spot welded together for added strength and security. This style of ashigaru currais armor features a very basic design, fittings, materials and minimal odoshi (lacing) attaching the gessan (armored skirt).  This style was commonly known as an “Okegawa Ni-Mai Dō”.

Towards the end of the Sengoku era, the ashigaru would have likely made up the bulk of the Daimyo’s forces. The ashigaru were considered part-time soldiers and were often conscripted from the peasant class. They spent most of their life working the land and didn’t have economic means to purchase any weapons or armor of their own. They also had little, to no weapon or military training. Because of this, the Daimyo would outfit Ashigaru Samurai with the necessary arms and armor to fit their clan’s economics, as well as provide basic training. The most common of weapons provided would have been the Naginata, Yari or Teppo.

The ashigaru could easily be identified on the battlefield by the simplicity of their armor. Commonly, they only wore the basic protection, unlike the high-ranking soldiers who wore more elaborate suits of armor. Most of the time the only protection the ashigaru wore was the Samurai Dō inscribing their lord’s mon or personal badge in the front plates proclaiming allegiance and uniformity. A conical hat called jingasa made of lacquered hardened leather or iron. The Japanese foot soldier had less protection than his lord did. Generally, the ashigaru would also wear a simple kote (armored sleeves), and / or suneate (shin guards).  This Ashigaru armor set is known as “Okashi gusoku“, meaning “lent armor set”, made specifically for a low ranking soldier, usually of basic quality. 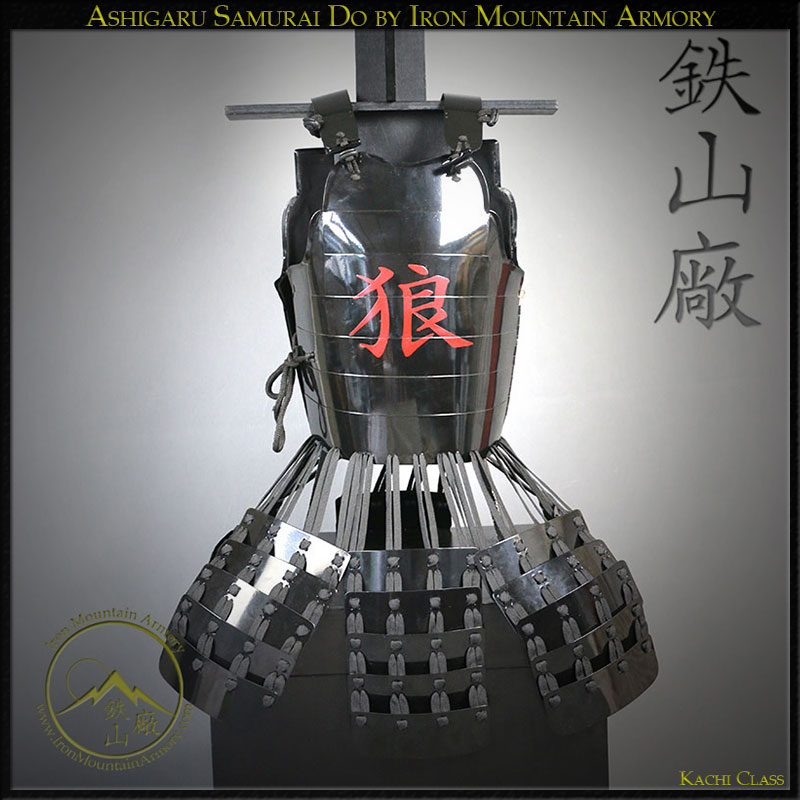 We are the ONLY exclusively licensed Dealer of quality armour for the world renowned Iron Mountain Armoury and Little Star Enterprises Inc. in Australia.